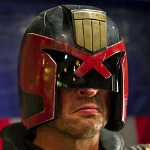 The debut trailer for Dredd was released yesterday, and it kicks the badassary levels into overdrive. Some of you might be familiar with the 1995 Judge Dredd movie starring Sylvester Stallone. I probably just made you cringe by reminding you of such a terrible film. This new Judge Dredd stars Karl Urban, who is taking a break from playing Bones in Star Trek to breaking bad guys’ bones as the dreadful Judge.

The trailer informs us that the ass that must be judiciously kicked by Judge Dredd belongs to a drug kingpin who wants to dominate the city. She has invented a drug that slows down time and allows for many exciting gun battles and explosions. The drug is named “Slo-Mo,” and every action movie director has been addicted to it since the late 90’s – get details here.

The trailer looks exciting and full of cheesy one-liners. My favorites are probably “It’s Judgment Time!” and “Your sentence is death!” The special effects will probably be pretty good, and the trailer makes the movie seem enjoyable until the number 3 nefariously sits down next to the letter D. 3D doesn’t make a movie bad but a lot of bad movies are made in 3D. I can only hope this isn’t one of them.