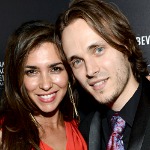 Even though I haven’t been a consistent watcher of General Hospital over the years, my fandom, which dates back to the Luke and Laura days, has never wavered. Super excited that the show scored five Daytime Emmy awards, including Best Drama, Lead Actor (Anthony Geary), Supporting Actress (Nancy Lee Grahn), Supporting Actor (Jonathan Jackson) and the Directing team.

Here’s Jonathan Jackson on the red carpet with co-star Lisa Vultaggio, who played Hannah Scott on the show. She and Jonathan have been married since 2002 and have three kids. I love Jonathan as Lucky Spencer and look forward to seeing him on Nashville this fall.