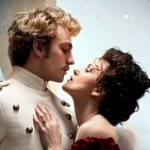 The poster promises that it’ll be “an epic story of love,” and it certainly looks that way based on the trailer, as well as frigid in a “cold winter” sort of way. Very Doctor Zhivago.

I’m sure I must have read the book by Leo Tolstoy somewhere in my education, but should I delve into it again before the movie drops? Tolstoy can be tough to wade through, and I don’t remember ever reaching the end of War & Peace.

Have you guys read Anna Karenina? Think the movie will do the book justice? Should I read it again?