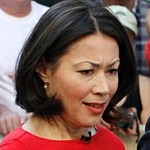 I’m not really a big morning show person. I generally work late at night and have worked as a night editor here and there through the years. But I’ve been following the story of Ann Curry’s exit from Today, and it just doesn’t seem right.

Word has it that NBC ousted her because of low ratings, deciding she wasn’t the best cohost to boost Today back to the top. Curry replaced Meredith Vieira as Matt Lauer’s cohost a year ago. During that year, Today fell into a virtual tie with ABC’s Good Morning America after holding the morning lead for more than 15 years.

Ann Curry: “Not the Way I Expected to Leave”

Curry told USA Today that she was “hurt” by NBC’s decision to replace her, and said she didn’t consider herself responsible for the drop in Today ratings. Based on her tearful goodbye, she clearly doesn’t like how it all transpired. “This is not the way I expected to leave,” she said. “For those of you who saw me as a groundbreaker, I’m sorry I couldn’t carry the ball over the finish line.”

But at least she’s staying with NBC. Her new title is “NBC News National and International Correspondent/Anchor” and “Today Anchor at Large.” No word on who will replace her, but the rumor mill is speculating it’ll be Savannah Guthrie, NBC’s chief legal analyst and cohost of the 9 a.m. hour on Today.

Not having watched Today much, I wonder why viewers consider her a groundbreaker … feel free to tell me in the comments below. And is there more to the story? Did Matt Lauer get her fired, as the Interwebs proclaim? Inquiring minds want to know.