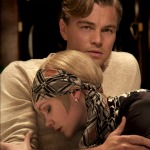 An updated version of the classic [amazon_link id=”B00136YCIG” target=”_blank” container=”” container_class=”” ]F. Scott Fitzgerald novel [/amazon_link] is due in theaters Dec. 25, 2012, and this is not your mama’s Great Gatsby. It stars Leonardo DiCaprio as millionaire Jay Gatsby, Carey Mulligan as Daisy Buchanan, and Tobey Maguire as bond salesman Nick Carraway, a Midwesterner now living on Long Island who finds himself fascinated by the mysterious past and lavish lifestyle of his neighbor Gatsby.

There are several previous adaptations of The Great Gatsby, including the 1974 film written by Francis Ford Coppola, directed by Jack Clayton, and starring Robert Redford, Mia Farrow, and Bruce Dern. It was a financial success, but a critical failure. I remember watching this version in school in my English class, but felt there were two better versions — the 1949 version starring Alan Ladd and Betty Field, and the 1926 version starring Warner Baxter and Lois Wilson.

Based on the trailer below, this new version features director Baz Luhrmann‘s flare for romance, big party scenes, glossy productions, and handsome stars with sex appeal like we saw in 1996’s Romeo and Juliet and 2001’s Moulin Rouge.

And in true Luhrmann style, the period drama is offset with current music, with the trailer featuring Kanye West and Jay-Z’s No Church in the Wild and former White Stripes frontman Jack White doing a cover of U2’s Love is Blindness, from their 1991 album [amazon_link id=”B005EYP8PO” target=”_blank” container=”” container_class=”” ]Achtung Baby[/amazon_link].

It’s too early to get excited about this movie, but it seems like perfect Oscar bait for DiCaprio. He delivers every role with Oscar panache, but has yet to win the golden statue (though he’s been nominated three times — for Blood Diamond, The Aviator and What’s Eating Gilbert Grape?). Maybe this is his time to shine.