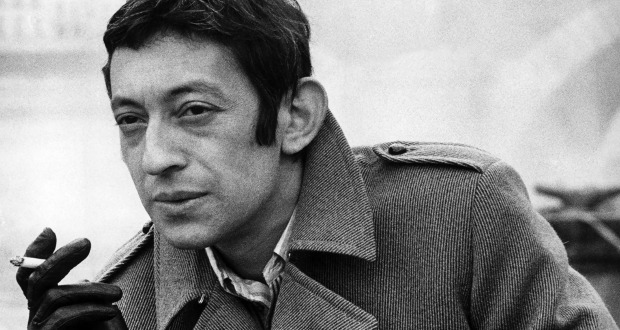 Actor Eric Elmosnino captures French musician Serge Gainsbourg to a T in director Joann Sfar’s 2010 film Gainsbourg: A Heroic Life, recently released on DVD. Gainsbourg was not a household word when I arrived in Paris in 1969, but he soon became one. His name solicited an embarrassed chuckle from my sister-in-law. My French husband’s mother would cast her eyes toward the ceiling and shake her head.  Serge got a kick out of shocking France. He was the country’s number one “provocateur,” cigarette butt hanging from the corner of his mouth, drink in hand, unshaven and unkempt. Poinçonneur des Lilas, Gainsbourg’s first hit, dates from 1958 and describes a man who dreams of escaping the boring job of punching holes in subway tickets. This record led to work with actress Juliette Greco. Their 1963 duo La Javanaise shot up the charts and remains one of the most hauntingly beautiful songs ever composed. Gainsbourg had begun to churn out hits.

His next, sung by France Gall, won the Eurovision song contest.  Gall also sang Les Sucettes, whose double meanings had tongues wagging since it was not about lollipops as the teenager thought but rather oral sex.  In 1968, Gainsbourg recorded Initials BB, collaborating with Brigitte Bardot, his mistress at the time.

The following year he starred in [amazon_link id=”B00140PKE6″ target=”_blank” container=”” container_class=”” ]Slogan[/amazon_link], a mediocre film that introduced him to actress Jane Birkin, 20 years his junior. A song, written for Bardot but never recorded, was released with Birkin simulating orgasm. Je T’Aime, Moi Non Plus was banned, but became an international hit all the same. See a pattern? I was not French and yet adored Gainsbourg. I could appreciate the clever word play, rhyme and incredible melodies. He went on to write music for Catherine Deneuve (1980), Isabelle Adjani (1983), Charlotte Gainsbourg (1985), and Vanessa Paradis (Johnny Depp’s partner) (1990).

Eric Elmosnino succeeds in making us believe that this physically repulsive but brilliant man charms ladies despite his penchant for breaking all the rules. This facet of Gainsbourg’s character – his creative side and penchant for rebellion –  is represented by a huge cartoon figure who appears for the first time as Gainsbourg’s father forces his son to practice piano. His alter ego plays music beautifully, just as he seduces the ladies for shy Serge, accepting, for instance, Greco’s offer to dance.

Gainsbourg was a part of my life for the 25 years I lived in France. When Jane left him in 1980, I felt regret. When he recorded a reggae version of La Marsaillaise, I was shocked by his chutzpah. When he burned a 500-franc bill on live television to protest heavy taxation, I howled with laughter. When he died March 2, 1991 of a heart attack, I mourned his passing and made the symbolic trip to his grave in Montparnasse. After watching the DVD, I asked myself, would American audiences get Gainsbourg: A Heroic Life?  Could someone who had not known his music still appreciate the songs? Was there a deeper meaning to derive from this story? Yes, I concluded. The film succeeds in showing how some artists, like Gainsbourg, live inside their imagination and, as Kenneth Turan wrote in the Los Angeles Times, battle the “personal demons” who share the space.

Gainsbourg’s house in Paris on rue de Verneuil has remained exactly as he left it. There’s still graffiti on the outside. His daughter, actress Charlotte Gainsbourg, plans to turn it into a museum.