After a few weeks without any good family movies, ‘Alpha and Omega’ arrives in theaters today, as well as the teen flick ‘Easy A.’ 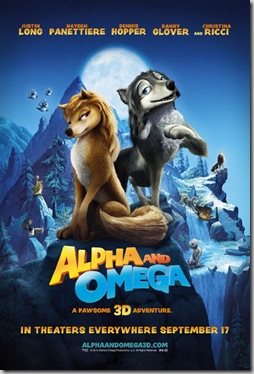 On the flip side, we’ve got the elevator thriller ‘Devil,’ as well as Ben Affleck in ‘The Town.’ Here’s the rundown:

‘Alpha and Omega in 3D’ – This cute animated film stars Hayden Panettiere and Justin Long as Kate and Humphrey, two wolves trying to get home after being shipped halfway across the country by park rangers. Humphrey is the ultimate Omega wolf, full of snappy one-liners and happy to hang with his motley pack of wolves and video-gaming squirrels. On the other hand, Kate is an Alpha, obsessed with duty and discipline and fueled by sleek moves. Humphrey’s motto – make ’em laugh. Kate’s motto – I’m the boss. And they have a thousand miles to go.

Back home, rival wolf packs are on the march, and conflict is brewing. Only Kate and Humphrey can help restore the peace, but first they have to survive each other. This was also one of Dennis Hopper’s last movies – he voiced the part of Tony and gets an “In memory of” billing, too. Directed by Anthony Bell; 88 min.; rated PG for rude humor and some mild action.

‘Easy A’ – After a little white lie about losing her virginity gets out, a clean cut high school girl (Emma Stone) sees her life paralleling Hester Prynne’s in ‘The Scarlet Letter,’ which she is currently studying in school – until she decides to use the rumor mill to advance her social and financial standing. Despite the whole virginity storyline, this looks to be a smart teen comedy, which I realize doesn’t happen very often these days. Directed by Will Gluck; 93 min.; rated PG-13 for mature thematic elements involving teen sexuality, language and some drug material.

‘Devil’ – Think being trapped in an elevator is stressful? Got claustrophobia problems? Try being trapped in there with the Devil! Yes, tensions run high with a group of people who realize that the Devil just might be trapped in there with them. Directed by John Erick Dowdle; written and produced by M. Night Shyamalan (maybe he figures it’ll be a hit if he doesn’t direct); 80 min.; rated PG-13 for violence and disturbing images, thematic material and some language including sexual references.

‘The Town’ – Ben Affleck does everything in this movie – he wrote, directed and stars in it. I just hope the trailer doesn’t give away any big plot points; maybe they’re just trying to steer us off course. Affleck stars as Doug MacRay, the de facto leader of a group of ruthless bank robbers who pride themselves in stealing what they want and getting out clean. With no real attachments, Doug never fears losing anyone close to him. But that all changed on the gang’s latest job, when they briefly took a hostage — bank manager, Claire Keesey (Rebecca Hall).

They let her go unharmed, but Claire is nervously aware that the robbers know her name and where she lives. But she lets her guard down when she meets a charming man named Doug — not realizing that he’s the same man who only days earlier had terrorized her. The instant attraction between them gradually turns into a passionate romance that threatens to take them both down a dangerous, and potentially deadly, path. Directed by Ben Affleck; 125 min.; rated R for strong violence, pervasive language, some sexuality and drug use.